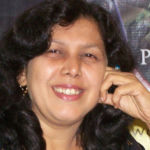 Why Is Manjiri Prabhu Influential?

According to Wikipedia, Manjiri Prabhu is an Indian author, TV producer and filmmaker. She has been hailed as the 'Desi Agatha Christie' by the media and is acknowledged as being the first woman writer of mystery fiction in India.

Other Resources About Manjiri Prabhu

What Schools Are Affiliated With Manjiri Prabhu?

Manjiri Prabhu is affiliated with the following schools: