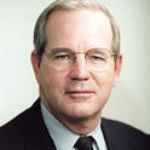 Why Is Manuel H. Johnson Influential?

According to Wikipedia, Manuel Holman "Manley" Johnson Jr. is an American economist, who served as the Vice Chair of the Federal Reserve in the mid-1980s. Since 1990, he has been co-chairman and senior partner at Johnson Smick International, Inc., an investments, economic and political consulting firm. He has also authored or co-authored six books.

Other Resources About Manuel H. Johnson

What Schools Are Affiliated With Manuel H. Johnson?

Manuel H. Johnson is affiliated with the following schools: