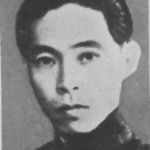 Why Is Mao Dun Influential?

According to Wikipedia, Shen Dehong , known by the pen name of Mao Dun, was a Chinese essayist, journalist, novelist, and playwright. Mao Dun, as a 20th-century Chinese novelist, literary and cultural critic, and Minister of Culture , was one of the most celebrated left-wing realist novelists of modern China. His most famous work is Midnight , a novel depicting life in cosmopolitan Shanghai. It is also considered to be the work with the greatest influence on his future writing. Furthermore, during the period in which he was writing Midnight, Mao Dun formed a strong friendship with another of China's most famous writers, Lu Xun.

Other Resources About Mao Dun

What Schools Are Affiliated With Mao Dun?

Mao Dun is affiliated with the following schools: