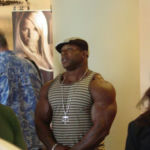 Why Is Marcus Haley Influential?

According to Wikipedia, Marcus Haley is an IFBB American bodybuilder. He most referred as Haley's Comet. Before touching weights, Marcus was taking care of his four little brothers while his mother was fighting a bout of drug abuse. An outstanding running back and defensive back at Pahrump High School, he earned a scholarship to Dakota Wesleyan University. He attended Dakota Wesleyan University for two years, but after encountering a lot a racism he returned home. Haley admits that he always looked up to Shawn Ray and Mike Ashley as a youth. While in Las Vegas, Haley started training at Golds gym and met a female bodybuilder named Gabby. His first show was the Golds Gym Classic in Las Vegas. Not knowing how to diet, he ate hamburger patties from McDonald's. Carb loading was done with rice and French fries. He placed third in the show.

Other Resources About Marcus Haley

What Schools Are Affiliated With Marcus Haley?

Marcus Haley is affiliated with the following schools: