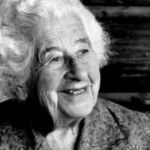 Why Is Margaret Murie Influential?

According to Wikipedia, Margaret Thomas "Mardy" Murie was a naturalist, author, adventurer, and conservationist. Dubbed the "Grandmother of the Conservation Movement" by both the Sierra Club and the Wilderness Society, she helped in the passage of the Wilderness Act, and was instrumental in creating the Arctic National Wildlife Refuge. She was the recipient of the Audubon Medal, the John Muir Award, and the Presidential Medal of Freedom—the highest civilian honor awarded by the United States.

Other Resources About Margaret Murie

What Schools Are Affiliated With Margaret Murie?

Margaret Murie is affiliated with the following schools: