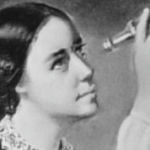 Why Is Maria Mitchell Influential?

According to Wikipedia, Maria Mitchell was an American astronomer, librarian, naturalist, and educator. In 1847, she discovered a comet named 1847 VI that was later known as “Miss Mitchell’s Comet” in her honor. She won a gold medal prize for her discovery, which was presented to her by King Christian VIII of Denmark in 1848. Mitchell was the first internationally known woman to work as both a professional astronomer and a professor of astronomy after accepting a position at Vassar College in 1865. She was also the first woman elected Fellow of the American Academy of Arts and Sciences and the American Association for the Advancement of Science.

Other Resources About Maria Mitchell

What Schools Are Affiliated With Maria Mitchell?

Maria Mitchell is affiliated with the following schools: