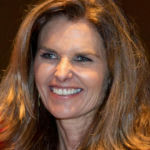 Why Is Maria Shriver Influential?

According to Wikipedia, Maria Owings Shriver is an American journalist, author, member of the Kennedy family, former First Lady of California, and the founder of the nonprofit organization The Women's Alzheimer's Movement. She was married to former Governor of California and actor Arnold Schwarzenegger, from whom she filed for divorce in 2011. Shriver has received a Peabody Award and was co-anchor for NBC's Emmy-winning coverage of the 1988 Summer Olympics. As executive producer of The Alzheimer's Project, Shriver earned two Emmy Awards and an Academy of Television Arts & Sciences award for developing a "television show with a conscience". Her mother, Eunice Kennedy Shriver, was a sister of John F., Robert and Ted Kennedy. Shriver is currently a "special" anchor and correspondent for NBC News.

Other Resources About Maria Shriver

What Schools Are Affiliated With Maria Shriver?

Maria Shriver is affiliated with the following schools:

What Are Maria Shriver's Academic Contributions?

Maria Shriver has made the following academic contributions: