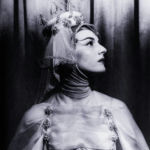 Why Is Marian Seldes Influential?

According to Wikipedia, Marian Hall Seldes was an American actress. A five-time Tony Award nominee, she won the Tony Award for Best Featured Actress in a Play for A Delicate Balance in 1967, and received subsequent nominations for Father's Day , Deathtrap , Ring Round the Moon , and Dinner at Eight . She also won a Drama Desk Award for Father's Day.

Other Resources About Marian Seldes

What Schools Are Affiliated With Marian Seldes?

Marian Seldes is affiliated with the following schools: