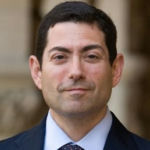 Why Is Mariano-Florentino Cuéllar Influential?

According to Wikipedia, Mariano-Florentino "Tino" Cuéllar is the president of the Carnegie Endowment for International Peace. He is a former Justice of the Supreme Court of California, a scholar and academic leader, and a former official in the Clinton and Obama administrations. Previously he was the Stanley Morrison Professor of Law at Stanford Law School and the Director of Stanford University's Freeman Spogli Institute for International Studies, and served as Co-Chair of the U.S. Department of Education's Equity and Excellence Commission. His publications address problems in administrative law and legislation, international affairs and international law, cyberlaw and artificial intelligence, public health and safety law, and institutions and organizations. He was elected to the President and Fellows of Harvard College in February 2019, and serves as chair of the board of the William and Flora Hewlett Foundation

Other Resources About Mariano-Florentino Cuéllar

What Schools Are Affiliated With Mariano-Florentino Cuéllar?

Mariano-Florentino Cuéllar is affiliated with the following schools: