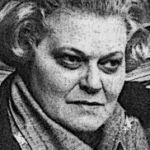 Why Is Marilyn Harris Influential?

According to Wikipedia, Marilyn Harris was an American author best known for her seven-novel "Eden" series, an historical saga about the Eden family of England. The series contains This Other Eden ; The Prince of Eden ; The Eden Passion ; The Women of Eden ; Eden Rising ; American Eden ; and Eden and Honor . She is also the author of the best selling novel, Hatter Fox , adapted into a 1977 CBS movie, The Girl Called Hatter Fox.

Other Resources About Marilyn Harris

What Schools Are Affiliated With Marilyn Harris ?

Marilyn Harris is affiliated with the following schools: