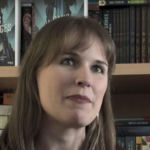 Why Is Marissa Meyer Influential?

According to Wikipedia, Marissa Meyer is an American novelist. Her debut novel, Cinder, was released on January 3, 2012. It is the first in her series The Lunar Chronicles. Early life and education Meyer was born in Tacoma, Washington and attended Pacific Lutheran University, where she received a Bachelors in Creative Writing and Children's Literature. She later attended Pace University and received a Master's in Publishing. Growing Meyer admits that she had a strong love for fairy tales and one of her favorite shows was Sailor Moon, both of which later impacted her creation of Cinder. Meyer also says that her love of superheroes helped lead to the creation of Renegades.

Other Resources About Marissa Meyer

What Schools Are Affiliated With Marissa Meyer?

Marissa Meyer is affiliated with the following schools:

What Are Marissa Meyer's Academic Contributions?

Marissa Meyer has made the following academic contributions: