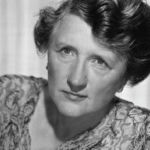 Why Is Marjorie Main Influential?

According to Wikipedia, Mary Tomlinson , professionally known as Marjorie Main, was an American character actress and singer of the Classical Hollywood period, best known as a Metro-Goldwyn-Mayer contract player in the 1940s and 1950s, and for her role as Ma Kettle in ten Ma and Pa Kettle movies. Main started her career in vaudeville and theatre and appeared in films classics, such as Dead End , The Women , Dark Command , The Shepherd of the Hills , Meet Me in St. Louis , and Friendly Persuasion .

Other Resources About Marjorie Main

What Schools Are Affiliated With Marjorie Main?

Marjorie Main is affiliated with the following schools: