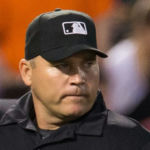 Why Is Mark Carlson Influential?

According to Wikipedia, Mark Christopher Carlson is an American umpire in Major League Baseball. He wore number 48 until the 2012 season, when his number changed to 6. He was promoted to crew chief for the 2021 season. Umpiring career Carlson began his career as a National League umpire in , and has worked in both Major Leagues since . Carlson had previously worked in the Pioneer, Midwest, Florida State, Southern, International, and Arizona Fall leagues before reaching the MLB. Carlson has umpired the Division Series , League Championship Series and World Series .

Other Resources About Mark Carlson

What Schools Are Affiliated With Mark Carlson ?

Mark Carlson is affiliated with the following schools: