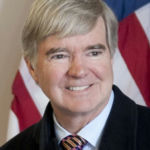 Why Is Mark Emmert Influential?

According to Wikipedia, Mark Allen Emmert is the current president of the National Collegiate Athletic Association. He is the fifth CEO of the NCAA; he was named as the incoming president on April 27, 2010, and assumed his duties on November 1, 2010.

Other Resources About Mark Emmert

What Schools Are Affiliated With Mark Emmert?

Mark Emmert is affiliated with the following schools: