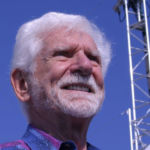 Why Is Martin Cooper Influential?

According to Wikipedia, Martin "Marty" Cooper is an American engineer. He is a pioneer in the wireless communications industry, especially in radio spectrum management, with eleven patents in the field. While at Motorola in the 1970s, Cooper invented the first handheld cellular mobile phone in 1973 and led the team that developed it and brought it to market in 1983. He is considered the "father of the cell phone" and is also cited as the first person in history to make a handheld cellular phone call in public, namely in 1973.

Other Resources About Martin Cooper

What Schools Are Affiliated With Martin Cooper ?

Martin Cooper is affiliated with the following schools: