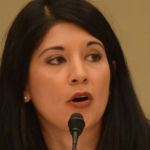 Why Is Mary Anne Franks Influential?

According to Wikipedia, Mary Anne Franks is an American legal scholar, author, activist, and media commentator. She is a professor of law and Dean's Distinguished Scholar at the University of Miami School of Law, where she teaches family law, criminal law, criminal procedure, and First Amendment law, and she serves as both president and legislative & tech policy director of the Cyber Civil Rights Initiative. Her scholarly work focuses on online harassment, free speech, discrimination, and violence. Franks also writes for various news media outlets, including The Atlantic, The Guardian, The Independent, and the Daily Dot. She is a regular contributor to The Huffington Post. As a frequent legal commentator in the media on cyberlaw and criminal law issues, Franks has been quoted in publications such as The New York Times, The Wall Street Journal, The Washington Post, and The New Yorker, and she has appeared on the Today show, HuffPost Live, and Al Jazeera America. Franks is a co-producer of the 2015 film Hot Girls Wanted, a documentary produced by the actress Rashida Jones that examines the "professional amateur" porn industry.

Other Resources About Mary Anne Franks

What Schools Are Affiliated With Mary Anne Franks?

Mary Anne Franks is affiliated with the following schools: