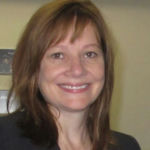 Why Is Mary Barra Influential?

According to Wikipedia, Mary Teresa Barra is an American businesswoman who has been the chair and chief executive officer of General Motors since January 15, 2014. She is the first female CEO of a 'Big Three' automaker. In December 2013, GM named her to succeed Daniel Akerson as CEO. Prior to being named CEO, Barra was executive vice president of global product development, purchasing, and supply chain.

Other Resources About Mary Barra

What Schools Are Affiliated With Mary Barra?

Mary Barra is affiliated with the following schools: