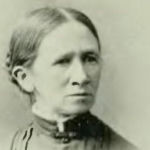 Why Is Mary H. Graves Influential?

According to Wikipedia, Mary H. Graves was an American Unitarian minister, literary editor, and writer. After Julia Ward Howe, Graves was the second woman to be ordained within this Christian theological movement. She aspired to the ministry, and studied under the guidance of Rev. Olympia Brown of the Universalist faith. She was ordained by James Freeman Clarke as a Unitarian minister, and passed years in several pastorates, the earliest of which was at Mansfield, Massachusetts. She preached with acceptance in various places in the west, in Peoria, Illinois, Earlville, Illinois, and Manitou, Colorado. She also gave to friends valuable assistance in the education of their children. As the years wore on, her strength proved unequal to the arduous duties of the ministry, and her time was filled with literary work. She contributed occasionally to the pages of The Christian Register, and other periodicals. With Julia Ward Howe, Graves edited a volume on the eminent women of New England, Sketches of representative women of New England .

Other Resources About Mary H. Graves

What Schools Are Affiliated With Mary H. Graves?

Mary H. Graves is affiliated with the following schools: