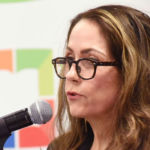 Why Is Mary Karr Influential?

According to Wikipedia, Mary Karr is an American poet, essayist and memoirist from East Texas. She is widely noted for her 1995 bestselling memoir The Liars' Club. Karr is the Jesse Truesdell Peck Professor of English Literature at Syracuse University.

Other Resources About Mary Karr

What Schools Are Affiliated With Mary Karr?

Mary Karr is affiliated with the following schools:

What Are Mary Karr's Academic Contributions?

Mary Karr has made the following academic contributions: