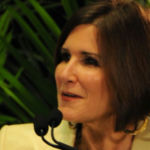 Why Is Mary Matalin Influential?

According to Wikipedia, Mary Joe Matalin is an American political consultant well known for her work with the Republican Party. She has served under President Ronald Reagan, was campaign director for George H. W. Bush, was an assistant to President George W. Bush, and counselor to Vice President Dick Cheney until 2003. Matalin has been chief editor of Threshold Editions, a conservative publishing imprint at Simon & Schuster, since March 2005. She is married to Democratic political consultant James Carville. She appears in the award-winning documentary film Boogie Man: The Lee Atwater Story and also played herself, opposite her husband, James Carville, John Slattery, and Mary McCormack in the short lived HBO series K Street.

Other Resources About Mary Matalin

What Schools Are Affiliated With Mary Matalin?

Mary Matalin is affiliated with the following schools: