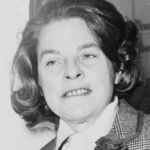 Why Is Mary McCarthy Influential?

According to Wikipedia, Mary Therese McCarthy was an American novelist, critic and political activist, best known for her novel The Group, her marriage to critic Edmund Wilson, and her storied feud with playwright Lillian Hellman. McCarthy was the winner of the Horizon Prize in 1949, and was awarded two Guggenheim Fellowships in 1949 and 1959. She was a member of the National Institute of Arts and Letters and the American Academy in Rome. In 1973, she delivered the Huizinga Lecture in Leiden, the Netherlands, under the title Can There Be a Gothic Literature? The same year she was elected a Fellow of the American Academy of Arts and Sciences. She won the National Medal for Literature and the Edward MacDowell Medal in 1984. McCarthy held honorary degrees from Bard, Bowdoin, Colby, Smith College, Syracuse University, the University of Maine at Orono, the University of Aberdeen, and the University of Hull.

Other Resources About Mary McCarthy

What Schools Are Affiliated With Mary McCarthy ?

Mary McCarthy is affiliated with the following schools:

Mary McCarthy has made the following academic contributions: