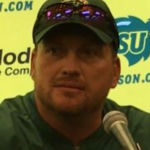 Why Is Matt Entz Influential?

According to Wikipedia, Matthew John Entz is an American football coach. He is the head football coach at North Dakota State University. Entz took over from the departing Chris Klieman after Klieman led the 2018 North Dakota State Bison football team to the program's seventh NCAA Division I Football Championship in eight seasons. Entz was the defensive coordinator for the Bison from 2014 until his promotion following the 2018 season.

Other Resources About Matt Entz

What Schools Are Affiliated With Matt Entz?

Matt Entz is affiliated with the following schools: