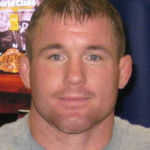 Why Is Matt Hughes Influential?

According to Wikipedia, Matthew Allen Hughes is an American retired mixed martial artist with a background in wrestling. Widely considered among the greatest fighters in the history of MMA, he is a former two-time UFC Welterweight Champion, UFC Hall of Fame inductee, and NJCAA Hall of Fame inductee. During his tenures in the Ultimate Fighting Championship, Hughes put together two separate six-fight winning streaks, defeated all the available opposition in the welterweight division, and defended the belt a then-record seven times. In May 2010, Hughes became the eighth inductee into the UFC Hall of Fame.

Other Resources About Matt Hughes

What Schools Are Affiliated With Matt Hughes ?

Matt Hughes is affiliated with the following schools: