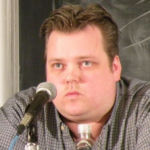 Why Is Matt Sloan Influential?

According to Wikipedia, Matthew Sloan is an American voice actor, director, writer, and YouTuber from Madison, Wisconsin. He and his friend Aaron Yonda are notable as the co-creators of the web series Chad Vader: Day Shift Manager, in which he voices the title character. Additionally, he appears in season one as the main antagonist, Clint. He later appeared in the first few episodes of the second series as Champion J. Pepper, Clint’s father. Since Chad Vader, he has gone on to voice Darth Vader in various Star Wars media as the sound double for James Earl Jones.

Other Resources About Matt Sloan

What Schools Are Affiliated With Matt Sloan ?

Matt Sloan is affiliated with the following schools: