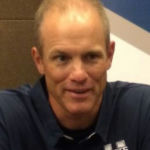 Why Is Matt Wells Influential?

According to Wikipedia, Matthew Scribner Wells is an American football coach and former quarterback who is currently the head coach at Texas Tech University. Wells previously served as the offensive coordinator and then head coach at Utah State University, where he was named Mountain West conference coach of the year in 2013 and again in 2018. He was named head coach of Texas Tech on November 29, 2018.

Other Resources About Matt Wells

What Schools Are Affiliated With Matt Wells ?

Matt Wells is affiliated with the following schools: