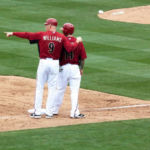 Why Is Matt Williams Influential?

According to Wikipedia, Matthew Derrick Williams , nicknamed "Matt the Bat" and "The Big Marine" is an American professional baseball manager and former third baseman who is the third base coach for the San Diego Padres.. A right-handed batter, Williams played in Major League Baseball for the San Francisco Giants, Cleveland Indians, and Arizona Diamondbacks. He managed the Washington Nationals from 2014 to 2015.

Other Resources About Matt Williams

What Schools Are Affiliated With Matt Williams ?

Matt Williams is affiliated with the following schools: