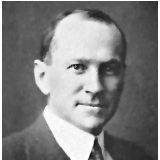 Matthew Albert Hunter was a metallurgist and inventor of the Hunter process for producing titanium metal.Hunter was born in Auckland, New Zealand in 1878 and received his early education in local public schools. He completed his Secondary education at Auckland Grammar School. He attended Auckland University College, where he earned his Bachelor's in 1900, and his Master's degree in 1902, and later studied at University College, London, earning a Doctor of Science degree, and at various other European universities. He met his future wife Mary Pond in Europe, as a fellow student, and married after traveling to America. He became employed at the research laboratories of General Electric, where he began his research into Titanium. Following the recession of 1908, he left GE and became a professor of Electrical Engineering at Rensselaer Polytechnic Institute in Troy, New York.