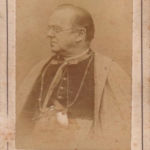 Why Is Maximilian von Lingg Influential?

According to Wikipedia, Maximilian Joseph Lingg, from 1902 Ritter von Lingg , was the 78th Bishop of Augsburg. Life Max Joseph Lingg was born on 8 March 1842, the eldest child of the baker Johann Georg Lingg and his wife Franziska , in Nesselwang, in the German district today called Ostallgäu. His mother was a relative of the Trappist abbot Franz Pfanner, and Max Joseph was himself a cousin of the epic poet Hermann Lingg. After attending the Nesselwanger elementary school, the local pastor Heine lobbied for Max Joseph to attend high school at St. Stephan's in Augsburg, and later to study for the priesthood. In 1861 he began his study of theology in Munich, where he also had contact with the conservative sect known as the "Old Catholics" . During his studies from 1861 he was a member of the Munich fraternity Algovia. Lingg remained in this fraternity for 38 years, despite his high ecclesiastical offices in Bamberg, and resigned only three years before his appointment as bishop in 1898 because of "increasing liberalization" of Fraternities. With the beginning of the winter semester 1863/1864 he went to the Pontifical Gregorian University in Rome. Throughout this period he published lyrical works. On 22 July 1865, he was ordained a priest in Munich and celebrated his primacy on 27 August at the St. Mang Church in Füssen.

Other Resources About Maximilian von Lingg

What Schools Are Affiliated With Maximilian von Lingg?

Maximilian von Lingg is affiliated with the following schools: