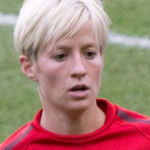 Why Is Megan Rapinoe Influential?

According to Wikipedia, Megan Anna Rapinoe is an American professional soccer player who plays as a winger and captains OL Reign of the National Women's Soccer League , as well as the United States national team. Winner of the Ballon d'Or Féminin and named The Best FIFA Women's Player in 2019, Rapinoe won gold with the national team at the 2012 London Summer Olympics, 2015 FIFA Women's World Cup, and 2019 FIFA Women's World Cup and she played for the team at the 2011 FIFA Women's World Cup where the U.S. finished in second place. Rapinoe co-captained the national team alongside Carli Lloyd and Alex Morgan from 2018 to 2020, with the team earning the Bronze medal in the 2020 Summer Olympics in Tokyo. She previously played for the Chicago Red Stars, Philadelphia Independence, and MagicJack in Women's Professional Soccer , as well as Olympique Lyon in France's Division 1 Féminine.

Other Resources About Megan Rapinoe

What Schools Are Affiliated With Megan Rapinoe?

Megan Rapinoe is affiliated with the following schools: