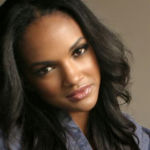 Why Is Mekia Cox Influential?

According to Wikipedia, Mekia Cox is an American actress and dancer, known for her recurring role as Sasha in the second and third seasons of The CW drama 90210, Dr. Robyn Charles in the NBC medical drama Chicago Med and her role as a dancer in the Michael Jackson concert series This Is It and the related film Michael Jackson's This Is It. In 2010, she co-starred as Lizzy Gilliam in the short-lived NBC spy drama Undercovers. She is also known for her role as Princess Tiana in the ABC fantasy drama Once Upon A Time and for her role as Detective Nyla Harper in the ABC police drama The Rookie.

Other Resources About Mekia Cox

What Schools Are Affiliated With Mekia Cox?

Mekia Cox is affiliated with the following schools: