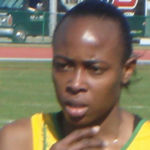 Why Is Merrecia James Influential?

According to Wikipedia, Merrecia James is a track and field middle distance athlete, competed collegiately for the University of Maryland Eastern Shore. She is the daughter of Merle Stewart and William James of Jamaica. She has seven half brothers and five half sisters. She represented Jamaica at the North American Central American Caribbean cross country meet in 2004, 2005 and 2006, winning the bronze medal, in 2005 the world half marathon championships in Edmonton Canada and in 2006 the world cross country championship in Fukuoka, Japan. She finished 2nd for Jamaica at the Central American Caribbean reggae half marathon in a time of 1:28:08. In her mid-twenties, James was in Chicago when she was introduced to The Church of Jesus Christ of Latter-day Saints. She was baptized soon afterward.

Other Resources About Merrecia James

What Schools Are Affiliated With Merrecia James?

Merrecia James is affiliated with the following schools: