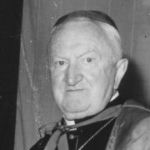 Why Is Michael Browne Influential?

According to Wikipedia, Michael J. Browne was an Irish prelate of the Roman Catholic Church. He served as Bishop of Galway and Kilmacduagh, Ireland, for almost forty years from 1937 to 1976. Browne was an important and outspoken member of the Irish hierarchy. His time as Bishop has been described by the historian James S. Donnelly Jr. as "far-reaching and ... controversial", while the historian of Irish Catholicism John Henry Whyte claimed that Browne’s "readiness to put forward his views bluntly is welcome at least to the historian".

Other Resources About Michael Browne

What Schools Are Affiliated With Michael Browne ?

Michael Browne is affiliated with the following schools: