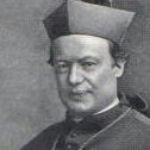 Why Is Michael Corrigan Influential?

According to Wikipedia, Michael Augustine Corrigan was an American prelate of the Roman Catholic Church who served as the third archbishop of New York from 1885 to 1902. Early life Michael Augustine Corrigan was born August 13, 1839, in Newark, New Jersey, the fifth of nine children of Thomas and Mary English Corrigan, both of whom had emigrated from Ireland. Thomas Corrigan owned a retail grocery and liquor business in Newark, and the family's well-to-do status allowed Michael to pursue his educational interests. He attended St. Mary's College in Wilmington, Delaware, from 1853 to 1855, Mount Saint Mary's University in Emmitsburg, Maryland from 1855 to 1857, spent a year in Europe, and received his bachelor's degree from Mount Saint Mary's in 1859. He became a member of the first class at the North American College in Rome, was ordained to the priesthood in September 1863 at the Basilica of St. John Lateran, and received a doctorate of divinity in 1864.

Other Resources About Michael Corrigan

What Schools Are Affiliated With Michael Corrigan?

Michael Corrigan is affiliated with the following schools: