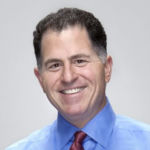 Why Is Michael Dell Influential?

According to Wikipedia, Michael Saul Dell is an American billionaire businessman and philanthropist. He is the founder, chairman and CEO of Dell Technologies, one of the world's largest technology infrastructure companies. He is ranked 24th richest person in the world by Bloomberg Billionaires Index, with a net worth of US$54.6 billion as of October 2021.

Other Resources About Michael Dell

What Schools Are Affiliated With Michael Dell?

Michael Dell is affiliated with the following schools: