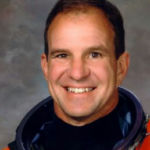 Why Is Michael J. Bloomfield Influential?

According to Wikipedia, Michael John "Bloomer" Bloomfield is an American former astronaut and a veteran of three Space Shuttle missions. Early life and education Born in Flint and raised in Lake Fenton, Michigan, Bloomfield received his bachelor's degree in Engineering Mechanics from the United States Air Force Academy, where he played Falcons football for coach Bill Parcells and was the team's captain. He became an F-15 fighter pilot with the rare combination of having graduated the Fighter Weapons Instructor Course and then selected as a test pilot . He earned his master's degree in Engineering Management from Old Dominion University in 1993.

Other Resources About Michael J. Bloomfield

What Schools Are Affiliated With Michael J. Bloomfield?

Michael J. Bloomfield is affiliated with the following schools: