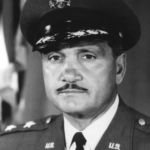 Why Is Michael J. Ingelido Influential?

According to Wikipedia, Michael Joseph Ingelido was an American Air Force major general who was commander of the Fourteenth Aerospace Force, , Ent Air Force Base, Colorado. Early life Ingelido was born in 1916 in Meriden, Connecticut, and was educated in the public schools of nearby Southington. He graduated from the Teachers College of Connecticut in 1937 with a Bachelor of Science degree in education. He performed graduate work at Duke and Yale universities and then taught school for three years in Connecticut. He enlisted in the Army Air Corps as an aviation cadet in February 1941, and following his graduation from pilot training, was commissioned a second lieutenant in September 1941.

Other Resources About Michael J. Ingelido

What Schools Are Affiliated With Michael J. Ingelido?

Michael J. Ingelido is affiliated with the following schools: