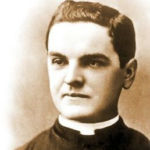 American Roman Catholic priest, founder of the Knights of Columbus and blessed

Why Is Michael J. McGivney Influential?

According to Wikipedia, Michael Joseph McGivney was an Irish-American Catholic priest based in New Haven, Connecticut. He founded the Knights of Columbus at a local parish to serve as a mutual aid and fraternal insurance organization, particularly for immigrants and their families. It developed through the 20th century as the world's largest Catholic fraternal organization.

Other Resources About Michael J. McGivney

What Schools Are Affiliated With Michael J. McGivney?

Michael J. McGivney is affiliated with the following schools: