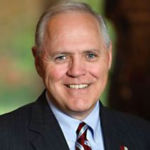 Why Is Michael A. Milton Influential?

According to Wikipedia, Michael Anthony Milton is an American Presbyterian minister, theologian, educator, pastor, broadcaster, author, musician and retired U.S. Army Chaplain . Initially a pastoral intern under D. James Kennedy, Milton became President and Senior Fellow of the D. James Kennedy Institute of Reformed Leadership. Milton succeeded Kennedy as the Teaching Pastor on the nationally televised sermon broadcast Truths That Transform . He has dual credentials in the Presbyterian Church in America and the Associate Reformed Presbyterian Church, and is also credentialed through the Presbyterian and Reformed Commission on Chaplains. Milton was elected to the James Ragsdale Chair of Missions and Evangelism at Erskine Theological Seminary in June 2015. He was named Provost of the Seminary in 2019.

Other Resources About Michael A. Milton

What Schools Are Affiliated With Michael A. Milton?

Michael A. Milton is affiliated with the following schools: