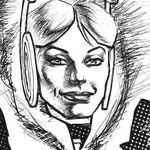 Why Is Michael Netzer Influential?

According to Wikipedia, Michael Netzer is an American-Israeli artist best known for his comic book work for DC Comics and Marvel Comics in the 1970s, as well as for his online presence.Biography Michael Nasser was born in Detroit, Michigan, U.S. His father was Adel Nasser a-Din, a Druze doctor of philosophy who worked most of his life in a Ford factory. His mother, Adele Ghazali, is a daughter to a Druze-Lebanese father and a Jewish-Lebanese mother who settled in New York in the 1920s. He contracted polio at the age of eight months which partially paralyzed his left hip and leg. After two years of medical treatment, he was sent with his mother and siblings to his father's Druze hometown, Dayr Qūbil in Lebanon. In 1967, at the age of 11, he returned to Detroit. In school, he became interested in comic book illustration and storytelling, and began developing skills as an artist. He used his art for a campaign that won him election of vice-president of his senior class in Redford High School, where he also gained the rank of lieutenant colonel in the JROTC program.

Other Resources About Michael Netzer

What Schools Are Affiliated With Michael Netzer?

Michael Netzer is affiliated with the following schools: