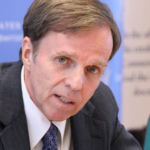 Why Is Michael Posner Influential?

His professional focus has been on the promotion of human rights, and he has worked around the world to fortify systems of accountability to protect refugees and other vulnerable populations from genocide, war crimes, torture and sexual assaults. He worked with Peter Gabriel, a musician and activist, to develop WITNESS, an organization using video and online technologies to expose crimes against humanity throughout the world.

He has been a vocal critic of war time torture, advocating for the McCain Amendment, which effectively prohibited the torture of detainees. He has testified in Congress on numerous occasions, sharing his knowledge of human rights violations around the world.

In 2009, he was nominated to become the Assistant Secretary of State for Democracy, Human Rights and Labor for the U.S. State Department. In his role as Assistant Secretary State, Posner was a key player in the development of US foreign policy that combined national security interests and measures for the protection of human rights.

Other Resources About Michael Posner

What Schools Are Affiliated With Michael Posner ?

Michael Posner is affiliated with the following schools: