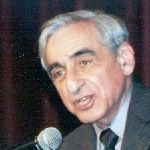 Why Is Michael Walzer Influential?

According to Wikipedia, Michael Laban Walzer is an American political theorist and public intellectual. A professor emeritus at the Institute for Advanced Study in Princeton, New Jersey, he is editor emeritus of Dissent, an intellectual magazine that he has been affiliated with since his years as an undergraduate at Brandeis University. He has written books and essays on a wide range of topics—many in political ethics—including just and unjust wars, nationalism, ethnicity, Zionism, economic justice, social criticism, radicalism, tolerance, and political obligation. He is also a contributing editor to The New Republic. To date, he has written 27 books and published over 300 articles, essays, and book reviews in Dissent, The New Republic, The New York Review of Books, The New Yorker, The New York Times, Harpers, and many philosophical and political science journals.

Other Resources About Michael Walzer

What Schools Are Affiliated With Michael Walzer?

Michael Walzer is affiliated with the following schools:

What Are Michael Walzer's Academic Contributions?

Michael Walzer has made the following academic contributions: