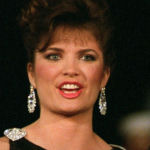 Why Is Michelle Royer Influential?

According to Wikipedia, Michelle Renee Royer-Jefferson is an American television personality and beauty queen who won Miss USA 1987 and second runner-up to Miss Universe 1987. Early life Prior to competing in Miss Texas USA, Jefferson grew up in Keller, Texas, attended Keller High School where she was active in the high school band program, serving as drum major. She continued her education at Texas Wesleyan University. She is the daughter of a salesman, who changed jobs frequently.

Other Resources About Michelle Royer

What Schools Are Affiliated With Michelle Royer?

Michelle Royer is affiliated with the following schools: