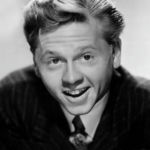 Why Is Mickey Rooney Influential?

According to Wikipedia, Mickey Rooney was an American actor. In a career spanning nine decades, he appeared in more than 300 films and was among the last surviving stars of the silent-film era. He was the top box-office attraction from 1939 to 1941, and one of the best-paid actors of that era. At the height of a career marked by declines and comebacks, Rooney performed the role of Andy Hardy in a series of 16 films in the 1930s and 1940s that epitomized mainstream America's self-image.

Other Resources About Mickey Rooney