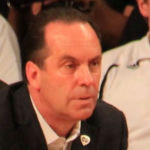 Why Is Mike Brey Influential?

According to Wikipedia, Michael Paul Brey is an American college basketball coach. He has been the men's head coach at the University of Notre Dame since July 14, 2000. Early life and education Brey, the son of Olympic swimmer Betty Brey, graduated from DeMatha Catholic High School in Hyattsville, Maryland in 1977. As a two-year letter winner under coach Morgan Wootten, Brey helped the team to a 55–9 mark. He enrolled at Northwestern State University, where he played varsity basketball for three years . He played one season at George Washington in 1981–82 after sitting out the 1980–81 season as a transfer. He served as team captain and was named most valuable player with 5.0 points and 4.8 rebounds per game for the Colonials. In 1982 Brey graduated from George Washington University with a bachelor's degree in physical education.

Other Resources About Mike Brey

What Schools Are Affiliated With Mike Brey?

Mike Brey is affiliated with the following schools: