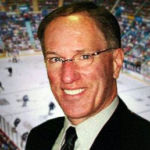 Why Is Mike Emrick Influential?

According to Wikipedia, Michael "Doc" Emrick is an American former network television play-by-play sportscaster and commentator noted mostly for his work in ice hockey. He was the lead announcer for National Hockey League national telecasts on both NBC and NBCSN. Among the many awards Emrick has received is the NHL's Lester Patrick Award in 2004, making him the first of only five to have received the award for media work, and the Foster Hewitt Memorial Award by the Hockey Hall of Fame in 2008. He has also won nine national Emmy Awards for excellence in sports broadcasting, the only hockey broadcaster to be honored with even one. On December 12, 2011, Emrick became the first member of the media to be inducted into the United States Hockey Hall of Fame. In 2017, Sports Illustrated listed Emrick as the sportscaster of the year.

Other Resources About Mike Emrick

What Schools Are Affiliated With Mike Emrick?

Mike Emrick is affiliated with the following schools: