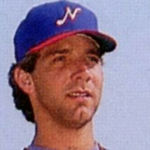 Why Is Mike Henneman Influential?

According to Wikipedia, Michael Alan Henneman is a former Major League Baseball pitcher with a 10-year career from 1987 to 1996. He played for the Detroit Tigers and Texas Rangers, both of the American League, and the Houston Astros of the National League.

Other Resources About Mike Henneman

What Schools Are Affiliated With Mike Henneman?

Mike Henneman is affiliated with the following schools: