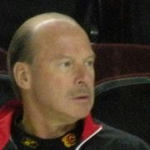 Why Is Mike Keenan Influential?

According to Wikipedia, Michael Edward Keenan is a Canadian professional hockey coach who most recently coached the Kunlun Red Star of the Kontinental Hockey League. Previously, he served as head coach and/or general manager with several NHL teams between 1984 and 2009. He has also worked as an analyst for the New York Rangers on MSG Network and as a hockey analyst for NBC Sports Network.

Other Resources About Mike Keenan

What Schools Are Affiliated With Mike Keenan?

Mike Keenan is affiliated with the following schools: