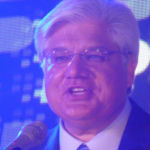 Why Is Mike Lazaridis Influential?

According to Wikipedia, Mihal "Mike" Lazaridis, OC, O.Ont, FRS is a Greek-Canadian businessman, investor in quantum computing technologies, and founder of BlackBerry, which created and manufactured the BlackBerry wireless handheld device. With an estimated net worth of US$800 million , Lazaridis was ranked by Forbes as the 17th wealthiest Canadian and 651st in the world.

Other Resources About Mike Lazaridis

What Schools Are Affiliated With Mike Lazaridis?

Mike Lazaridis is affiliated with the following schools: