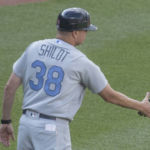 Why Is Mike Shildt Influential?

According to Wikipedia, Michael Timothy Shildt is an American baseball coach for the San Diego Padres, where he is the team's interim third base coach. After serving as a scout and manager in the St. Louis Cardinals minor league system, he served as the first-base coach for the Cardinals in 2017 and was named the club's manager in 2018 after the dismissal of Mike Matheny. The 2019 Cardinals advanced to the National League Championship Series and he was named NL Manager of the Year. The 2020 and 2021 seasons ended in losses at the National League Wild Card Game. Shildt was dismissed as Cardinals manager on October 14, 2021. He was hired by the San Diego Padres on January 26, 2022, in a player-development role, and stepped in as the team's third-base coach to begin the 2022 season after Matt Williams had hip surgery.

Other Resources About Mike Shildt

What Schools Are Affiliated With Mike Shildt?

Mike Shildt is affiliated with the following schools: