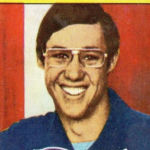 Why Is Mike Stamm Influential?

According to Wikipedia, Michael Eugene Stamm is an American former backstroke swimmer who earned a gold medal as a member of the winning U.S. team in the men's 4×100-meter medley relay at the 1972 Summer Olympics in Munich, Germany. At the 1972 Olympics, the 20-year-old Stamm also won individual silver medals in the 100-meter and in the 200-meter backstroke.

Other Resources About Mike Stamm

What Schools Are Affiliated With Mike Stamm?

Mike Stamm is affiliated with the following schools: